They say “statistics lie,” but they don’t. People do.

Well, that’s a little harsh. Sure some people intentionally skew numbers and selectively pull data, but most folks misinterpret data by accident.

Why do you care if you’re not a scientist?  Because you collect data about your business all the time — web traffic, revenue sources, expenses, customer behavior — and make decisions based on your (mis)understanding of that data.

It’s easy to boil a data set down to a single number, like an average. Easy — and often shortsighted.

Single numbers feel powerful; you feel able to wrap your mind around a lot of data. Sometimes that is indeed useful, but it can also obscure the truth. Since the statistics are identical in each case, it’s clear that statistics alone don’t describe what’s actually happening with the data.

The true story of each graph:

Trouble is, the average is often not only useless, but misleading. Take “average time-on-site,” a typical web analytics metric. It’s important enough in Google Analytics that it appears on the top-level site information dashboard, as shown in this real example from my blog:

Of course it’s better if a visitor spends longer on a site because it means they’re engaged.

Is 1:33 good? Actually that’s the wrong question. The true story becomes clear when you break this single number into pieces: 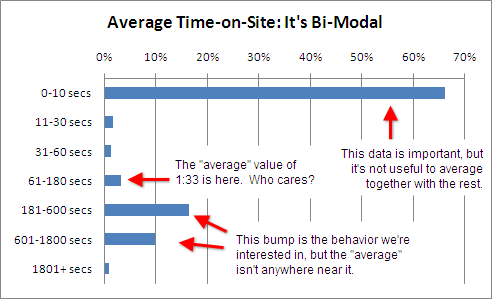 The “average” time-on-site of 93 seconds is useless when trying to explain user behavior. The correct way to think about time-on-site is:

Furthermore, the way you optimize #1 and #2 are completely different:

So not only is the average value 1:33 useless in describing reality, it’s useless in deciding what to do next.

Whether it’s a cover article in Cosmo or a web analytics report, people love to read “Top 10” lists.

Top lists can be useful. For example, here are the origins of search engine traffic to my blog: There are several “other” search engines (e.g. Ask and AOL), but the traffic doesn’t amount to a hill of beans (as we say in Texas). It’s useful to cut those out of the chart because they’re just noise.

The trouble starts when “Other” isn’t so trivial. The following chart is a real report from a board meeting I was in years ago (only the names and layout have been altered): 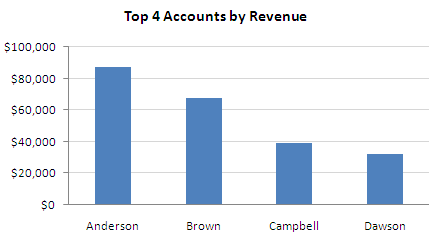 Looks fine. But later I was poking around the data myself and decided to add a category for “Others”: Some people call this the Long Tail — a pattern wherein a few big players are far larger than any other single player, but when you add up all the little players they collectively match or — as in this case — tower over the big players.

If you discover a Long Tail in your data, there’s several ways to react. Consider the case of having a Long Tail in sales of your product line, as with iTunes and Amazon who have a few blockbuster hits plus a long tail containing millions of products that sell infrequently. Here are four opposing viewpoints of how you could approach the situation:

No one of these views is automatically correct. For example, iTunes gets most of their revenue from the big players (contrary to “common” knowledge), but other companies like Beatport make millions of dollars off the Long Tail of niche music markets (electronic music, in their case).

The only wrong thing is to ignore your “Others” column. Unfortunately, even these basic observations are assumptions, and could be wrong depending on context. Consider these scenarios:

An interesting result of #1 is that in order to obtain a useful “average” value we ought to throw away almost all our data points! The opposite is true with #2.

The point is that the context for the data determines how the data is interpreted. You can’t blindly apply a “rule,” such as which data points can be ignored.

Formulas are not a substitute for thinking.

Like any tool, statistics is useful when used properly and dangerous otherwise. Like any algorithm, garbage in yields garbage out.

Yes this means “metrics analysis” is harder than it looks. Yes this means you have to take time with your data and verify your thought process with others.

But what’s the alternative? Thinking about your processes incorrectly and then wasting time on senseless “solutions?”

Final lesson: Since metrics are hard and take time and effort to get correct, don’t attempt to measure and act on 100 variables. Pick just a few you really understand and can act on, and optimize with those alone. You’re more likely to make a genuine, positive change in your business.

What tips do you have? Leave a comment and join the conversation.