Color theory is a little obsession of mine. You’re here for startup advice, but this week I’m taking an indulgence. Leave a comment if you want to see more or fewer of these little distractions.

Why are artists special?

Ask any artist to explain how color works, and they’ll launch into a treatise about how the Three Primary Colors: red, blue, and yellow form a color “wheel:” Why “wheel?” All other colors are created by mixing these three colors in certain proportions, they’ll explain. In particular, mixing equal quantities of each pair of Primary Colors produces the Secondary Colors (orange, green, and purple): Continuing this process produces the infamous color wheel you probably learned in school; a pretty, symmetrical, satisfying device in which each hue melds seamlessly and linearly into the next: Unfortunately, none of this stands up to even minor scrutiny.

For example, open up your desktop printer and you’ll see something quite different: Three colors of ink which, when combined, produce all others: cyan, magenta, and yellow. (Black is included as a money-saver — black is the cheapest and most common color; it’s cheaper to have a black cartridge than to dump ink from the other three.)

But wait! I thought the “Primary” colors were red, blue, and yellow, not cyan (bluish-green), magenta (bluish-red), and yellow. So this is a different set of three colors which are “Primary,” yet still generate color wheels containing all the other colors. So what does the “Primary” designation really mean? 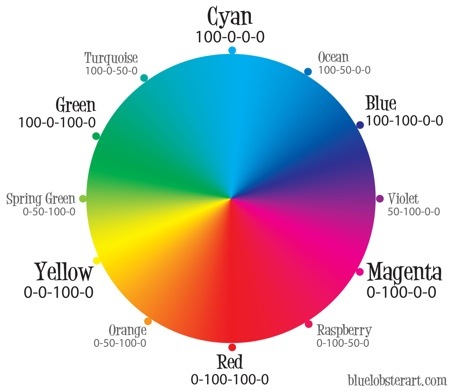 TVs and computers are different yet again. If you stand close to a CRT (non-flat-screen), you can see that every pixel (or “dot”) is really three tightly-packed colored phosphors: red, green, and blue. If you’ve done computer graphics you’ve been forced to name colors using these “RGB color values;” true geeks automatically think “yellow” when they see #FFFF00. (If it’s intuitive to you that #A33F17 is burnt orange, you are indeed a God among men. I’m looking at you, @soopa.)

This leads to yet another system of three “Primary” colors generating all the others, and another color wheel. This one is a little easier to explain — ink and paint are subtractive (adding cyan, magenta, and yellow yields black) whereas colored light is “additive” (meaning if you blast red, green, and blue you get white): 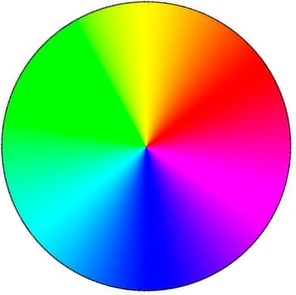 This isn’t adding up. Let’s turn to science.

Physics is clear and certain. Light is a wave of energy (or a particle, but for today it’s just a wave OK?) and, like a vibrating guitar string, light waves wiggle at certain frequencies. Some of those frequencies we detect with our eyes, and the frequency determines its color: Now we’re getting somewhere! Or are we?

First off, we’ve suddenly lost the notion of a “wheel.” As much as the previous color systems have contradicted each other, at least they all agreed that hues transform smoothly and continuously, one to the next, a beautiful symmetry with neither beginning nor end.

But here we have a clear beginning (red) and end (violet). The colors in-between are continuous — and seem to generally match the order seen in the various color wheels — but then it just terminates with violet. How does it get back to red? What about that fuchsia / magenta / purplish-reddish color which is clearly present in every color wheel but missing from the physical spectrum?

How can a color be missing? Where does it come from?

But wait, we’re not done.

Another thing to resolve: Opposites

After all, there’s nothing in that linear physical light spectrum to indicate that any color is “the opposite” of any other, particularly not those two pairs. And the color wheels aren’t much help either; trying to match the “opposites” on the painter’s wheel yields an unsatisfying asymmetry where two of the primaries are opposite, and the third is opposite from a secondary: But “opposites” are real. In the early 1800s Goethe (yes, the Goethe) noticed that red/green and blue/yellow were never perceived together, in the sense that no color could be described as a combination of those pairs. No color could be described as “reddish green;” if you are asked to imagine “a green with a bit of red,” nothing comes to mind. In the following 150 years, various experiments were devised to test this idea, all of which validated his observation.

There’s something to this. Something neither the wheels nor the spectrum can explain.

It’s time to get down to the real source of color: The ridiculous complexity of human beings.

The answers: Physiology (of course).

Caveat Emptor: The following is a gross and irresponsible over-simplification of what actually happens. But it’s correct in its general thrust, and few people on Earth (myself excluded) are qualified to explain with complete accuracy, so in the interest of general illumination, no pun intended, OK maybe intended just a little bit, I’m doing it anyway. So there.

Of course it starts in the eye, where three types of cells called “cones” measure the amount of red, green, and blue light hitting the retina.

“Ah ha,” I can hear you CSS freaks scream, “it’s RGB after all! I was right! All that time spent — nay invested — in knowing things like #001067 is the default title-bar color in Windows 95 was well worth it!”

Hold on there, cowboy. Actually “amount of red, green, and blue” is a gross simplification, as I warned. Peaking under the hood (just a tad), the three types of cones are in fact denoted S, M, and L for “short, medium, and long” wavelengths, and actually respond to a range of wavelengths, with a certain level of response for different wavelengths, like so: But I digress, and besides I did promise to be all gross and irresponsible, so I’ll stick with that.

So there are R, G, and B cones. The signals from these cones don’t go straight to the brain; they first pass through a pre-processing filter, and it’s this filter that explains all the mysteries. Actually there are three filters. 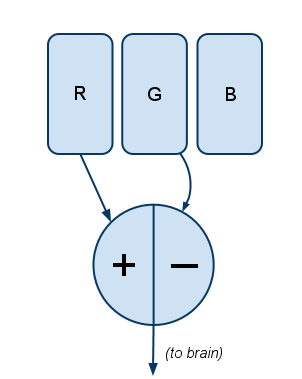 Explanation: The more R there is, the more positive the signal; the more G, the more negative the signal. If there’s relatively equal amounts of R and G — whether neither of both, a little of both, or a lot of both — the signal is zero.

This explains why there’s no “greenish-red.” Because:

In both cases, Filter #1 computes the same output signal: 75. But remember the brain doesn’t get the raw R and G signals — it only gets the filter’s output — so the brain cannot tell the difference between these two scenarios.

So there’s no such thing as “red with a little green” — there’s just a less intense red. The brain physically cannot see “greenish-red” because the filter removes that information.

Knowing that blue/yellow is the other opposite pair, you can probably guess what Filter #2 is: In short, it measures the quantity of light without regard to what hue it is. This is “how bright,” or “luminance” in color-theory parlance.

And magenta? It comes from full R and B with no G, activating Filter #1 full-positive, Filter #2 at zero. It’s not a physical wavelength of color, it’s just a combination of outputs from two filters.

To do this “wheel” thing properly, you have to represent the red/green and blue/yellow opposites. It’s not at all difficult, so it amazes me how rarely it’s seen or taught:

Four primary colors? Yes, why not? It’s the closest thing to the actual physiology without getting complex.

This is just the beginning of color theory. To give you a glimpse of how complex it gets, consider this:

When a color is juxtaposed with other colors, we perceive it as a different color. For example, most people will say the small square on the left is orange, whereas the one on the right is brown: Actually, the squares are exactly the same color! The surrounding context dictates the perceived color, on top of all that wavelength-physiology we just did.

It gets worse, because the brain projects abstract things it knows about the natural world onto your perception of color. For example, we know intuitively that shadows artificially darken colors, so our brains automatically account for this in our perception of those colors. (It’s called “color constancy.”) For example, you know that the dark and light colors on this hot air balloon are “the same:” But it also results in optical illusions so powerful that even when you know the trick you still can’t see it correctly. Like this: Which square is darker: A or B? In fact A and B are the same color (#787878), but you can’t see it even when you know this. To prove it to myself I had to open this picture in an image editor and actually move one square over another to see it was the same.

You got this far? You still care? Sheesh, you’re as weird as me.

If you really want to lose a few days of your life, this is an amazing, in-depth treatise on color theory. That link is just page 1 of 8. Good luck.