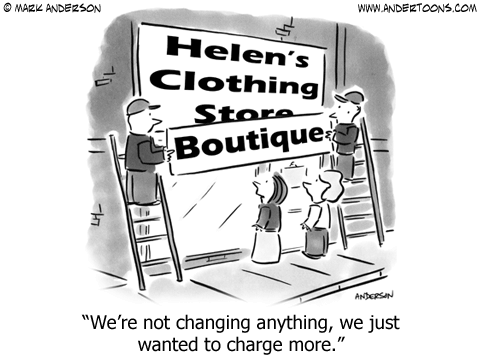 This is a guest post by Sacha Greif — a designer and entrepreneur who recently sold thousands of copies of a self-published eBook that shows how to design a user interface step by step. He’s worked with multiple startups and is also the founder of Folyo, a service that helps companies find vetted freelance designers. Here, Sacha explains how he set the pricing for his eBook — a critical step in its success.

My Dad recently chided me for buying cheap, store-brand brown bread. Since we also happened to have fancy imported Danish bread in the pantry, I challenged him to a blind taste test. Sure enough, he couldn’t tell the difference, despite one kind of bread costing twice as much as the other.

Intuitively, we tend to see prices as a consequence of a product’s inherent worth, and marketers everywhere want to keep it that way. But psychologists know that prices have a lot more power than that: the right pricing can greatly contribute to a product’s perceived worth, or even make the entirety of it (ever heard of diamonds?).

I’ve always been fascinated by the power of pricing, as demonstrated by stories like the jeweler who doubled her sales by trippling her prices. So when I recently wrote an eBook to show people how to design user interfaces, I knew how important setting the right price would be.

Why charge at all? Isn’t fame and glory and RSS subscribers enough? Besides the obvious answer (to make money), I believe the Internet is already overrun with free stuff. I personally download tens of free fonts, icons, books, and videos every week and use none of them for lack of time.

So by charging hard cash for my product, I was doing two things: I was signaling that it was better than the content you can find for free, and I was also increasing the chance people would actually read the book after they downloaded it since they had paid good money for it (thus using the sunk costs fallacy to my own advantage).

The first step was doing some basic market research to see how much people were willing to pay. I asked on Twitter, and got answers in the $5-$10 range.

I also looked up existing questions on Quora, and asked if it’s better to start low and increase prices, or start high and lower them. (Short answer: “it depends.”)

I also considered the fact that thanks to the App Store, people are now used to paying out small, “less-than-a-coffee-at-Starbucks‚” amounts. But I also knew anything over $10 would trigger different psychological mechanisms. (In a minute you’ll see proof/disproof of this hypothesis.) Since my goal was to go for as many sales as possible to create a readership and potentially pave the way for future books, I settled on the $1-$10 price range.

After deciding on the approximate price, the next step was focusing on market segmentation. I had somewhat of an epiphany after reading this article by Joel Spolsky about segmentation (seriously, this is probably one of the top ten posts about sales on the web), and realized that this complex-sounding term actually covered a very familiar concept.

To simplify things, segmenting means charging each person as much as they’re willing to pay. This is exactly what happens when you haggle in a market in Beijing or a suk in Jerusalem: the seller starts outrageously high, and the sale is made when you’ve succeeded in bringing his price down to the highest possible price that you’re willing to pay (thus maximizing his profits).

Since it’s much harder to find out how much someone is willing to pay on the web, you simply offer different price points and let people self-select the one that best fits their needs. Of course you can’t just offer the same product for two different prices. So you need to find a differentiator; in my case, I decided the Deluxe edition of the eBook would also include the original Photoshop sources.

The last pricing tactic I employed was a lower introductory price. This does two things: first, increase the number of people who buy the product early, which will make for a bigger launch and help achieve critical mass (the more people have bought the book, the more people will buy it. Social proof 101).

But it’s also a way to reward early adopters. They’re the ones taking all the risk to find out if the book is worth reading. They’re also the people who follow you most closely, and who care about you most. They’re a special cohort and should be treated as such. (Seth Godin harps on this a lot.)

So let’s review our pricing constraints:

When you lay things out like this, it becomes pretty clear that there aren’t a ton of choices. I settled on:

The Deluxe edition is twice the price of the Normal edition, and the discount is also 50%, which keeps the math simple.

So here’s the part you’ve all been waiting for: how did it go?

I submitted the eBook’s landing page to Hacker News, and it quickly shot up the rankings, amassing more than 300 votes, and even reaching second place on the front page for a while.

So it looks like my pricing scheme was a success. But why exactly? Luckily, Hacker News commenters gave me some insight into their thought process:

I just want to say, the 2.99 was an awesome price point – from an incentive to buy stand point. With 5.99 including PSDs it seemed like a no brainer. — samstave

For me the pricing model is perfect for something like this. $2.99? thats right in my ‘don’t even think about it’ impulse range. $5.99 for additional features? I’m already paying $2.99, its not much more AND I get more stuff. Bravo! — jwarzech

I love the way this is structured, and the pricing model was absolutely perfect. TAKE MY MONEY — christiangenco

So two things are at play here. First of all, the lower $2.99 price point was low enough that it constituted an impulse buy and didn’t trigger people’s anti-spending defense mechanisms.

Second, the higher $5.99 price point was close enough to the first one that people felt that as long as they were going to buy the book anyway, they might as well get the better version.

And the stats agree: unlike what I expected, more people bought the Deluxe version (758 sales, vs 718 sales for the regular edition).

This is price anchoring at work. Marketers often give premium options an artificially high price point to make the normal option seem more attractive in comparison (think of all these pricing plans table with a $1000/month “enterprise‚” option right next to the $10/month consumer option).

But in our case, the reverse happened: the proximity of both pricing points made the high-end option seem like a bargain.

I thus give you this pricing theorem: if two prices are far away, the lower one will be more attractive. But if they’re close, the higher one becomes the better choice.

It’s of course hard to say exactly just how big a part pricing played into the success of the book. And of course, I might have earned even more if the eBook had cost $0.99 or even $49.99!

But I’m already extremely happy with the sales and feedback I got, so I will resist the temptation to ask “what if?” After all, if I really want to find out I can always write another book!

So I hope next time you’re ready to sign up for a monthly software plan or doing your grocery shopping, you’ll take a moment to consider the prices in front of you. Maybe you’ll be able to find out the hidden reasoning behind the numbers!