A sizable percentage of Capital Factory startup submissions take the form of the “marketplace.” In fact, 3 of the 10 selected companies from the past two years have followed this business model. Marketplace companies are notoriously difficult to start, so I’m constantly amazed that so many entrepreneurs chose this route. Maybe it’s the “go big or go home” mentality? If there’s a business plan less likely to succeed than a restaurant, this has to be it.

But it’s not impossible; here’s some of the pitfalls and how to address them.

A marketplace is born

A “Marketplace” connects buyers and sellers who otherwise have trouble finding each other. 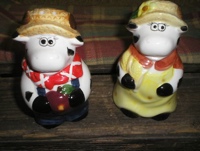 Let’s say someone owns a two miniature porcelain cows ironically dressed as farmers and performing the very functional task of salt and pepper shaker. Of course the owner wants to sell these (because now he’s sober), but how?

Halfway around the world, someone else is proudly admiring their collection of 167 cow-themed salt and pepper shakers which, 82 years from now, will be on an episode of Antiques Roadshow where it will be valued at…. (I won’t spoil the surprise!). She wishes she could expand her collection but how?

eBay converts these complementary desires into transactions. It’s a “marketplace” in that they “create a market” in which sellers connect with buyers because eBay provides a sufficient quantity of both.

These companies typically make money either by charging sellers for listing (akin to the yellow pages) or by charging a sales commission (akin to a “finder’s fee”). It’s easiest to charge sellers because they’re the ones trying to make money.

So what’s the problem?

The hardest part of any business is the beginning, but this is especially true for marketplace companies because you have a classic chicken-egg problem.

Specifically, buyers don’t visit the site because you’re obscure and lack inventory, but sellers aren’t interested in listing because there’s no buyers.

It’s worse than it sounds because you also have what I call the double company problem: You’re trying to build two companies at the same time, and both have to succeed or you’re dead.

For example, Priceline has to sell each hotel chain on the value of their service, create integrations between hotel management systems and their database (in real time), and negotiate legal and financial details. At the same time, they also run television ads (with celebrities), are expert at SEO and AdWords, built a user-friendly web site, and do tech support for consumers.

These are distinct operations — different clients, different technology, different sales process — almost like two separate companies. The effort is doubled and the risk is quadrupled. After all, if you get sellers but not buyers (or vice versa), the marketplace is a failure!

This all sounds dismal, but here’s a handful of strategies to overcome the obstacles.

Forget automation: Do everything manually

One of the allures of the marketplace business is that once you reach critical mass, you should be able to “sit back, relax, and let the money roll in.” Automation is the key; buyers and sellers have to find each other and perform transactions without requiring additional human beings.

But just because automation is the goal doesn’t mean it’s the way to start. The good thing about automation is it’s efficient; the bad thing is you cannot learn because you’re not involved in the process. And at the start, learning is where you should be spending most of your time!

For example, when SpareFoot began they weren’t sure how to charge storage companies. Should it be a $20/month listing fee? Or a flat “finders fee” per lead? Or a commission on leads which convert to sales? Could they charge extra for a “premium” listing? Should purchases go through SpareFoot so they can extract their cut, or should they bill storage companies separately?

If they had picked a strategy and automated it, there’s a low chance they would have picked the right one. All that time spent writing and debugging code, worthless.

Instead SpareFoot decided to automate nothing. When a potential buyer made a search, they grabbed their email or phone number and said “Thanks, we’re going to find you a great deal by Thursday.” Then they banged the phone all day, calling up regional storage facilities. Their pitch was awesome: “I’ve got a lead for you; his name is John Doe and he’s looking for a 10×20 with air conditioning. If your rate is competitive, we can do the deal today. By the way, if you want us to send leads like this to you all the time, it’s $20/mo to list with us.”

The bold phrase in there is damn compelling, right? And of course they varied the offer based on current pricing theory or in real-time based on the interaction with that particular storage facility.

None of this — determining the pricing structure and amount, building relationships with facility managers, and ensuring buyers’ success — would have happened if they started by writing code or any other sort of automation.

Happy buyers before the network effect

Clearly the value of a marketplace increases as it grows — both as a business and to the buyers and sellers.

This is most apparent with companies like eBay and Craig’s List: The immense variety of listings facilitates long-tail transactions that would be impossible with a smaller, more specialized marketplace.

But at first your marketplace won’t be large, so to get started you have to deliver value even though you’re small.

To see this done right, consider Threadless, a bootstrapped marketplace matching people seeking unique T-shirts with people who invent them. Even if the site contained only ten T-shirts, as long as they were awesome buyers would still be able buy a cool T-shirt. In fact, the site’s initial obscurity would be a virtue, because part of what makes a T-shirt “cool” is relative scarcity.

As another example, consider Etsy: A marketplace linking people who create handmade goods with people who appreciate the craftsmanship and uniqueness that can’t be found at Walmart and who want to subsidize creative arts. Even with just ten items for sale, buyers would still be purchasing a handmade product and supporting an artist; marketplace enormity doesn’t increase the pleasure of the buyer.

eBay and Craig’s List are counter-examples: Their value-proposition is “you can buy anything,” which works only when the seller network is immense. If you’re bootstrapping and your value proposition includes the words “anything” or “anyone,” you’re probably reaching too far.

Solve the seller side first

It’s typically easier to solve the seller side of the equation than the buyer side.

After all, the value proposition to the sellers always boils down to “You’ll make more money,” whether that means a new sales channel or a way to monetize surplus inventory. Sellers are often already selling, which means they’re easy to find and they answer the phone. With the right proposition there’s little reason for them not to try you out.

And you could ask for a few things in return:

Another reason to start with the sellers is that if you do attract even a few buyers and there’s no inventory, they’ll have a bad experience (e.g. “I tried a search over the entire state and found nothing!”). They’ll never return.

Whereas if you at least have inventory, each consumer could not only potentially buy something, but might spread the word that your site really works.

Why waste time and money acquiring buyer traffic if you can’t capitalize on it?

Use a novel strategy for attracting buyers

The buyer side of a marketplace often boils down to a numbers game: If you can get N visitors per month and P% of them buy, it works. Typically P is small, so N has to be really big.

Unfortunately that puts you into the same position as every other website on Earth — competing for traffic.

If your answer to how you’ll attract big N are things like SEO, Google Ads, and word-of-mouth, that’s an automatic fail. First of all, this is what everyone else is doing, so none of this is a competitive advantage. Second, you can’t directly control any of these things, so it’s do-and-pray, not a strategy.

To have any chance at success on the buyer side you need superior strategy. As an example of one, take OpenOfficeSpace, a new startup that’s a marketplace for partial office spaces like subleases and co-working; the Priceline of office space. There’s no way they could compete on keywords like “office space” or “subleases,” neither in SEO nor AdWords.

So instead, they wrote an amazingly useful guide to leasing commercial real estate, aimed at the small business audience. There’s a butt-load of important advice in there, some of which was new to me and some I’d learned by screwing it up a few times — things like how to root out all the actual leasing costs, what parts of the lease are negotiable, move-in conditions, how to deal with brokers, and techniques for finding space.

This is so valuable, you know people are going to bookmark it. Many will spread the word through Twitter and Facebook just because it’s genuinely useful information. Bloggers (like me apparently!) will promote it.

This produces a steady stream of new eyeballs — all people pre-qualified to be interested in the marketplace aspect of the business. The chatter even helps with SEO — that link I gave them kicks some juice their way, and deservedly so.

What are other advantages or pitfalls of marketplace-style businesses? How else can you address the difficulties? Leave a comment and join the conversation!