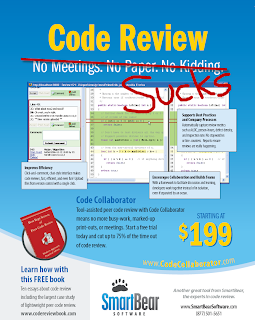 I first read that bizzare phrase — is it OK to sucks? — in a Slashdot article seven years ago. Companies like Lockheed Martin were suing people who registered LockheedMartinSucks.com and a big battle ensued over the line between free speech and trademark violation.

I had that phrase in mind when I suggested that the title on our full page advertisement should read:
Peer code review doesn’t have to SUCK.
We were brainstorming.  There were other ideas.  I had to admit it might offend some readers.  I lost.  Fine.
We went to press and the ad did really well.  We scored in the top 95 percentile on various measures in an independent test.  We got a surge in folks trying our stuff and asking questions.  So no regrets… but still… “suck” is funny…
Six months later I got the SD West 2007 Conference Guide.  On the inside front cover was a letter from the conference organizer entitled, “A Conference that Doesn’t Suck.”  Hey!
Then I find David Platt is giving a talk called “Why Software Sucks.”  The work “suck” appears three times in the course description.  In fact he even wrote a book with that title.
Nowadays it seems like every day I see a company with big-name customers who uses the word “suck” on their front page.
Turns out it is OK to sucks!
It’s better than OK.  Small businesses have to get noticed with no money.  The least you can do is give yourself a notable phrase.  Or image: 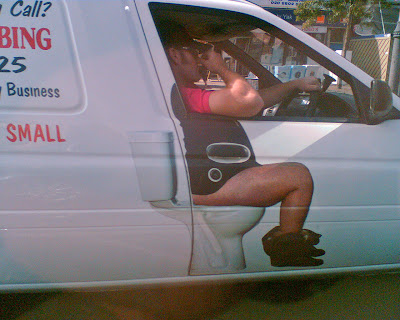 Take a chance.  Risk offending.  If you don’t offend some people, you’re not saying anything worth hearing.  Being notable beats being forgotten.  For every person who is offended there’s another who just fell in love.